A Big Math Lesson for My Big Girl

Let me start by saying, I am not allowed to call my newly four year old daughter a baby or little girl.  She is a big girl and nothing gets her heated faster than being called little or baby!  I think that is because she is the youngest of three, having two older brothers to be exact.  Her whole life is spent trying to keep up.  As far as she is concerned, their ages are equal.  Actually, she rules the roost most of the time, keeping both boys in line. :) Yesterday while in our home-school classroom, she found some left over foam sticks.  She pulled them out with excitement and handed them to me.  I told her we could sit down and sort them by color.  She quickly gave me instructions that I would sort certain colors and she would sort the rest.  After we sorted, she wanted to count how many stick were in each color. I decided she this was holding her interest, we should continue the lesson.  I told her to line them up by color.   She loved lining everything up just right.  I can't blame her, I love it when things line up just right (too many years in dance and drill team working with formations).  She was still interested so we continued into "more and less".  We compared which stick had the most, which had the least, and which were the same.  I thought it was great that we were able to get so many math lessons in one sitting.  I love it when that happens!  We discussed color, sorted, counted, lined them up (which resembled a graph) and then discussed less and more.  AWESOME!  It was a big math lesson for my baby, oops I mean, big girl. :) 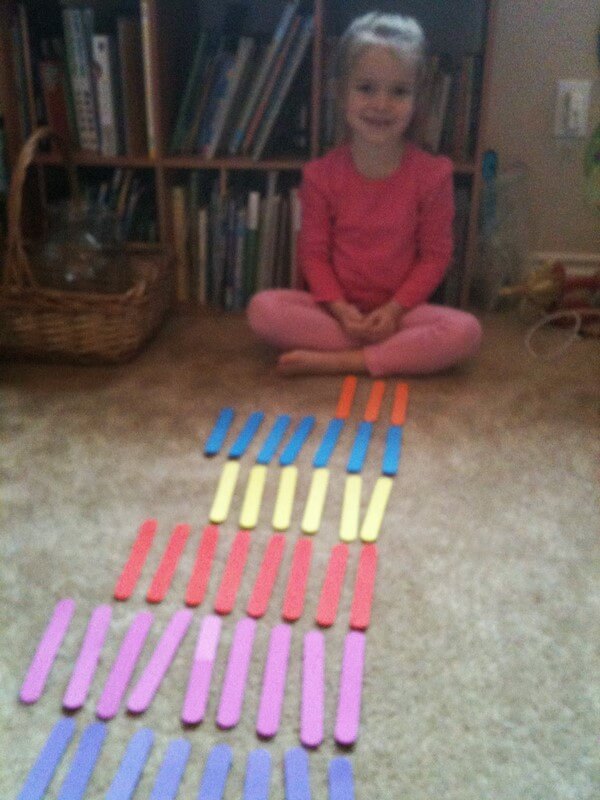 Proud to show off her work!
(I know the photo is poor quality.  I took it with my very, very outdated phone)

The best part, we used supplies we already had on hand.  It was nothing fancy and coudl be duplicated with just about anything you have around the house.