When I was growing up one of my favorite Christmas decorations was my mother's nativity scene.  Since the figures were plastic, she allowed me to sit and re-arrange each piece.  My grandmother had given her the nativity set and my grandfather built the stable.  Over the years, my grandmother bought a new piece for each of her grandchildren.  The result would be a full nativity set by the time we were married and in our own homes.  My grandfather also built most of our stables.  I think mine was store bought but I love it just the same. Our little nativity set has also become a favorite of our children.  It sits on the table behind the couch just begging to be played with.  I have noticed that there isn't a day that goes by that one if not all of my kids take the time to move the characters.  Sometimes the characters are crowded into the stable because...well, it is raining. :)  Other times the characters are spread out.  I also noticed one day that the wings from the angel had been removed and were laying beside the stable.  I couldn't quite figure out the meaning behind that one. :) Yesterday when I was tidying up the living room, I noticed a new arrangement of the characters.  They had been organized by their role in the birth of Jesus.  All of the wise men were gathered together.  The shepherds were in a different area but still circled together.  Baby Jesus was left alone in the stable with the animals.  The part I found so fascinating was the scene of Joseph and Mary.  They were huddled tightly together with the angel.  It looked as if the angel was encouraging them about the importance of their child's birth.  I wish I could have heard the conversations and imagination of the child who arranged this scene.  It was so beautiful and sweet. 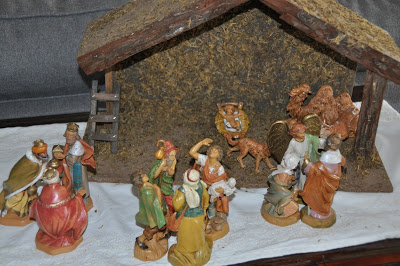 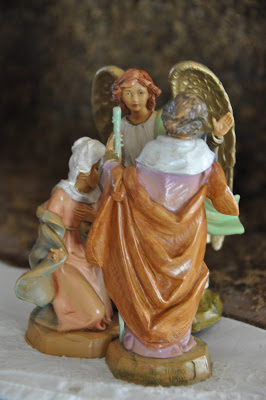 I feel like our little family has changed so much with our Christmas traditions.  Years ago the focus was Santa and a little of Jesus and his birth.  Now it is the exact opposite.  The kids still believe in Santa but is just isn't the focus.  They mention Jesus's birth (and move the characters of the nativity scene) on a daily basis, yet maybe mention Santa once a week.  It has been a welcomed shift.  In a way, I let the kids dictate what is important and then steer them back when needed.  But I have to say, they have really allowed Jesus to guide their Christmas season. I am going to begin a nativity scene collection for each of them.  I think I will give it to them for the first Christmas they are married.  I had better get started.  Oh my!