Keeping the Old, Adding the New 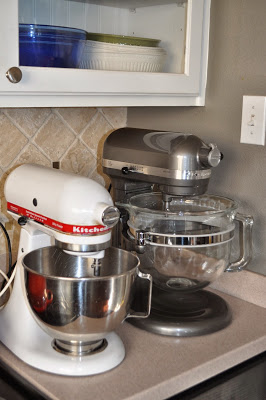 As you all know and as I have said many, many, many times...I LOVE TO BAKE!  It is a family trait on both sides.  My mother's side has generations upon generations of women who loved to bake.  The same is true on my father's side.  I am blessed with countless family recipes and holiday baking traditions. My maternal grandmother, Esther Johnson, passed away in 2010 (A Little Wisdom from Grandma, Johnson Strong).  We hung onto just about every item she owned.  My cousins and I divided the treasured items used and owned by our amazing grandmother.  One of the items I received, was her Kitchen Aid Stand Mixer.  I was over the moon to own something she used so often.  We can't quite figure out how old it is, but my mom thinks it is at least 30 years old.  I can't even begin to imagine how many dozens of cookies or batches of homemade cinnamon rolls she made with it.  I often joke that it has magical powers and everything I make in it is extra yummy.  Actually, it is not a joke...I truly believe it! :) This year, while making Thanksgiving dinner, my husband noticed the motor was making a strange sound.  He said it was "skipping gears".  He brought it to my attention and I refused to believe that my fourth child (named, Kitchen Aid) could be wearing out. I ignored his suggestion... I pushed forward, even though I did notice the strained sound in the motor... Kitchen Aid and I made it through Thanksgiving! :) A couple of weeks ago, my husband talked me into a new model.  He said it was only a matter of time until Kitchen Aid bit the dust!  Did he have to be so blunt?!  I mean, she was sitting right there! I had to admit the new model was beautiful.  The bowl was 2.5 quarts bigger than Kitchen Aid's bowl. The dough hook was formed with a new technology.  The color was a sleek gun metal gray....  Plus my mother is always reminding me how my family will only grow in number.  She says since we have three children she figures we will have at least 6 grandchildren plus three spouses and their parents, and so on and so on.  I am going to need a bigger house with an industrial kitchen for future holiday gatherings!!! Oops sorry, the thought of an industrial kitchen makes daydream. Where was I?  Oh yes.... My husband knew exactly what I was thinking. WHAT IF MY FOOD WAS NOT AS GOOD WITH THE NEW MIXER?  IT DOES NOT HAVE GRANDMA'S MAGICAL TOUCH! He bought it anyway because he knew I never would.  Not to mention, they are not cheap and he knows I will not spend that much money on myself! The day arrived when the new mixer was delivered.  We put it on the counter next to Kitchen Aid, it dwarfed her in size.  I did not have any feelings towards it.  But I didn't have a choice.  I had to turn it on and use it.  The first recipe I made in the new mixer was a batch of vanilla bean scones.  Okay, I have to admit it worked beautifully.  It also sounded good. I have gotten use to the new model, however, I just can't get rid of Kitchen Aid.  While making cinnamon rolls, it dawned on me I didn't have to get rid of her.  I could use the new model for large things, bread dough, batches of cookies, mashed potatoes, etc.  However, I could continue to use Kitchen Aid for smaller items, particularly homemade icing or anything that will not put to much of a strain on her motor.  I did come to terms with the fact that my kitchen counter looked ridiculous with two mixers sitting on it.  I have put Kitchen Aid in the pantry but I will continue to pull her out and use her from time to time. 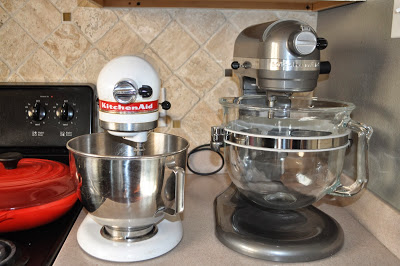 Happy baking from my kitchen to your's!