Family Read Along: Indian in the Cupboard

The kids and I just finished our first Family Read Along (or at least that is what I am calling it).  I had noticed when reading to my five year old that the seven and ten year old always ended up snuggled in right next to us.  It never really seemed to matter what book was being read.  If two of us were on the couch, the classroom floor, or one of their beds the other two would stop what they were doing and join in.  It warmed my heart to know they still loved being read to. With that in mind, I decided to try what we call a Family Read Along.  I wanted a longer book, with multiple chapters and few pictures.  I wanted the kids to have to really use their imaginations to bring the story to life.  Pictures are great but then you already have the characters placed in front of you.  It is so much better when you get to decide what each character looks and sounds like.  However, I also needed a book that would hold the attention of both boys and girls and a five year age difference. I was hoping to start with Charlotte's Webb.  We already have the movie and I figured the kids would enjoy the book plus get a kick out of watching the movie.  When we went to the library to check it out, it was currently lost.  So, Plan B was a novel called Indian in the Cupboard by Lynne Reid Banks.  I had never heard of the book but a friend had recently told me how much her son enjoyed it. The library did have the book along with four other books in the series.  They also carried the movie - SCORE!  Now we had a book and we could follow it with the movie. I told the kids I would read one chapter per day.  Every day after lunch we would sit on the couch with loads of blankets and pillows.  I had so much fun reading to the kids.  They were quite entertained with my voices and accents.  The book is about a little boy who (with the help of an old cupboard and a magic key) turns a small plastic Indian to life.  There is so much adventure and action wrapped up in this children's novel.  Many times I would look up from reading to see the kids on the edge of their seats or biting their nails as to what would happen next.  I loved it when a chapter would end with a bit of suspense.  They would beg for me to continue reading but I would have them wait until the next day (to keep their interest up).  They spent hours acting out what we had recently read, taking on the roles of each character.  I, on the other hand, would have to rub my jaw and drink lots of water from reading with so much intensity.  :) After finishing the book, we watched the movie.  I was curious to see if they would notice how the movie is never quite as good as the book.  They did.  Throughout the entire movie they would chime in with what was missing or didn't seem quiet correct.  I was particularly impressed with the details my five year old noticed.  I had wondered while reading the book how much she was actually retaining.  Sure enough, she was absorbing just as much as her older brothers. 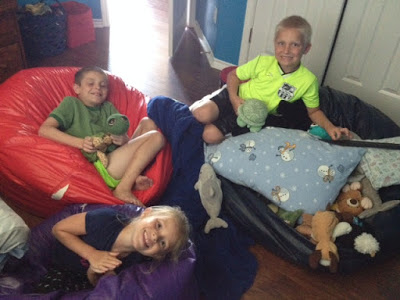 (snuggled in to watch the movie)

We have checked out the next book in the series, The Return of the Indian.  I don't think we will be getting to Charlotte's Webb anytime soon. :) Also, this could be turned into quite the unit study.  You could compare and contrast the different time periods, research Indians, discuss the geography of each character's region, the differences between the movie and the book, build various scenes from the book or movie with clay, draw or paint your favorite part, write a book report, give an oral report, and on and on and on....you get the point.  :) I realize there will be a time when my kids won't want me to read to them.  So for now, I am going to soak it in and enjoy these sweet moments.