Small Moments From Our Day

Today we had a very quiet schedule.  I allowed the kids to watch cartoons a little longer this morning, we completed our home school, visited the library, and have karate lessons this afternoon.  Everything was really quite normal, however, there were a couple of extra cute, adorable, sibling moments. Moment #1
My oldest son asked if he could complete his spelling test on the computer.  I thought that was a great idea.  Yesterday, I began teaching him proper keyboarding skills (the hunt and peck method drives me nuts).  I told him this morning not to worry about how he was holding his hands since I wanted him to focus on the spelling of his words.  He proudly said he wanted to do it the correct way.  It took awhile, but he completed all 25 words while holding his hands correctly.  I was so impressed at his focus and determination. Moment #2
After returning from the library, I jumped into switching the loads of laundry and thinking about starting lunch.  After a few minutes I noticed how quiet it was in the house.  I wondered if the kids had gone into the backyard.  Surely, I wasn't that focused on folding underwear that I missed them leaving the house!  To my complete surprise, I found all three of them on the couch with their library books.  My mouth literally hit the floor. 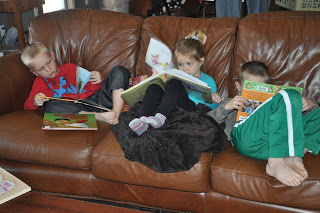 For the younger two, this moment only lasted about five minutes.  That is four minutes longer than I was expecting! 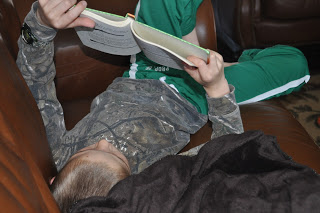 I just had to share these pictures of our oldest son.  He always reads like this...I can't believe his arms don't fall asleep. 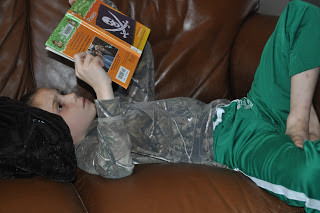 Moment #3
After asking the kids to sit down for lunch, my youngest son asked me to refer to him as Fireman.  Okay, I said and decided to play along.  He then said, "Thank you Chief" (towards me for giving him his lunch).  It was too cute.

Moment #4
Our oldest son offered his leftover crackers to his younger brother, which he declined due to "germs".  In the most monotone voice, our oldest son said, "Same family, same germs, its all the same."  I think it was his tone that was so funny.  Sometimes he seems like a 60 year old man. :)

Moment #5
I was sitting outside in the backyard and the kids were playing on the side of the house.  They were out of my eye sight, but I could hear them playing.  Next thing I know, our daughter comes around the corning dragging her feet (as if they weighed 20 lbs.).  Her shoes were covered in mud.  I quickly jumped up to assess the situation.  They told me they were having a "swamp adventure".  Oh my word, it was a lot of mud!!!  Needless to say, the adventure quickly came to an end.  "Ahhhh Mom!" 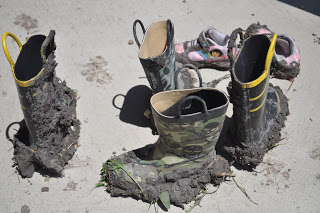 Here is the evidence!

I love these little moments.  Cleaning up the mud was annoying but seeing her come around the corner dragging her feet was unforgettable.