We have had such a lazy day.  It rained earlier so the kids have pretty much played in the loft and I did countless loads of laundry.  While folding, folding, folding and then more folding I enjoyed listening to them interact with one another.  Their ages are 8, 5, and 3 (two boys and one girl) and 90% of the time (well...maybe 85%) they get along.  Sometimes it is the boys together, sometimes it is little sister with one of her big brothers and a lot of the time it is all three playing together.  As I was listening to their imaginative conversations, I realized they have become close friends, not just siblings.  It is such a blessing to watch. 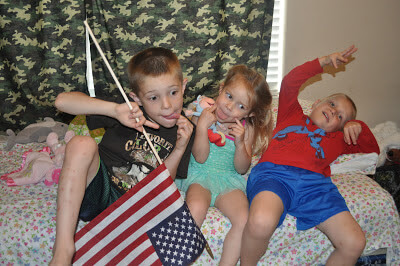 hanging out in their bedroom
(Notice, the floral sheets next to the camo curtains.  About six months ago our daughter insisted that she wanted to move into the boys' room.  The boys were very excited about the idea so we moved her bed into their very camoflauged bedroom).

I know their relationships will change with age but I hope they always consider one another as a best friend. The only child,
Elizabeth :)
Posted by Right Where We ARe at 3:24 PM