A Much Bigger Crossover 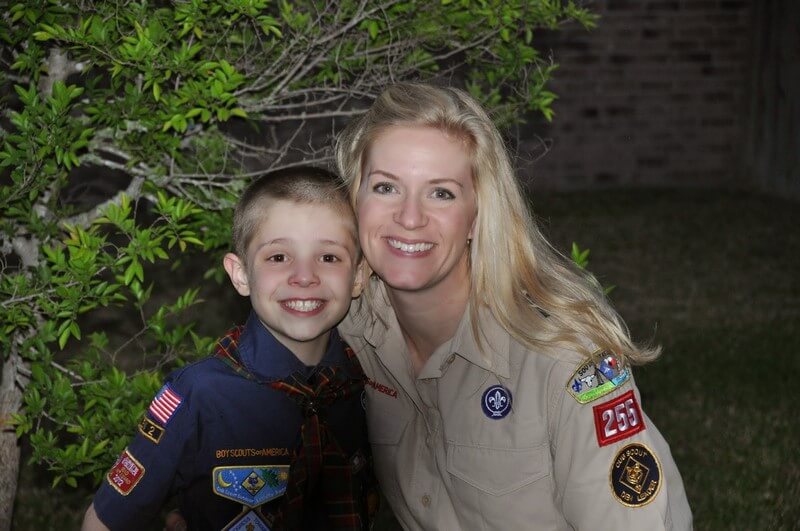 Last night was a very important and exciting night for our oldest son.  He was crossing over from Bear Scout to WEBELOS.  This is a big deal.  He has waited three years to make it through the ranks of Tiger, Wolf, and Bear.  He has talked a lot of becoming a WEBELOS.  We talked about the event for a couple of days, hoping to help any anxiety that may pop up.  He has always had such a difficult time with big events (especially when there is a lot of excitement and build up).  He genuinely wants to enjoy the event but it is just so hard for him.  His anxiety will begin to take over, then he gets frustrated with himself, which leads to more anxiety and disappointment.  What is a fun evening for most families is almost the setting for the perfect storm for our son.  The hardest part is watching him regret his behavior after the anxiety (and the event) have passed.  It is truly heart breaking.  He even expressed to me that he was really nervous about keeping his behavior under control. All week I have prayed and prayed and prayed for this evening.  I prayed that his anxiety would be manageable or nonexistent.  I prayed that I would not feel nervous in hopes that he wouldn't feed off my energy.  I prayed that I would not notice the stares, eye rolling, and comments from other parents.  I even prayed that one adult in particular wouldn't be there.  This person seems to have a real problem with my son, which causes the "momma bear" in me to come out. :) The night went how we expected it to go.  He had some serious anxiety and was unable to participate.  My husband worked with him at the back of the sanctuary.  They were literally on an emotional roller coaster and had to step out more than once.  Since I am a den leader, I tried to focus on the rest of the boys and the events of the night.  Two parents of a fellow scout helped entertain our other two children.  They are just the best people and have been so supportive and loving of our family.  I kept glancing to the back of the sanctuary, trying to communicate with my husband by thumbs up and raising of the eye brows (praying we wouldn't misinterpret each other's signals).  Seriously, we could be in the major leagues with our hand signals and communications skills across long distances! We were ending our portion of the evening and I could tell my son really wanted to come up and accept his new rank.  However now he was all the way at the back.  There was about a 30 second moment when the entire room was silent and watching our family as my husband and I tried to coax him down the isle.  It felt like watching a 1 year old take his first steps between two parents, except with way more stress and a much bigger audience.  In the end, he just couldn't get past the anxiety. In that moment, I realized that God answered my prayers in a much different way than I had hoped.  All along I had been praying that the "issues" would not happen, that I would not see the looks or hear the comments, that the anxiety would disappear, but what God did was so much bigger.  This was the first time that I realized I didn't care what anyone else thought.  In that moment, when my son was trying so hard to walk down the isle but just couldn't, I DID NOT CARE ABOUT ANYTHING OR ANYONE OTHER THAN MY SON AND MY FAMILY. When I got to the car, I realized how free I felt.  I no longer felt tied down by those feeling of what everyone else may have been thinking.  This has been such a handicap of mine.  In the past, when we've had an "episode" I stress, over analyze, and dissect what everyone may be thinking.  That feeling is gone - I have never experienced this before.  God answered my prayers in a way I never considered.    Why? He knows my heart. :)  He knows what I need most as a mom.  Was the night disappointing?  Yes, the first part was very disappointing.  Now let me tell you about the second part. When we got home, my son was very upset with himself.  In his mind, all of his hard work towards earning WEBELOS was out the window.  I quickly reminded him that nothing had changed, he still earned the rank.  I also told him that since I was a den leader, I could award the new rank at any moment (not sure if that is true or not but we went with it).  Through his tears and trying to catch his breath, he agreed to have our own private crossover ceremony.  We grabbed the other kids and the camera and had our very own crossover ceremony in our front yard.  His siblings were so sweet and supportive.  His brother grabbed a folding chair from the garage so he could sit and be the audience.  We even used the rock walkway in our flower bed as the crossover bridge.  After I placed the new neckerchief under the collar of his shirt, I announced him by rank and name.  He beamed with happiness.  It was pure joy and the stress from earlier in the night disappeared from his face. So, to most it probably did not look like a great night for our family.  To be honest, it probably looked like a three ring circus.  But for our family, it was a beautiful ceremony (in our front yard). :)  The success - we got him through the anxiety and helped him feel better just by being his family. 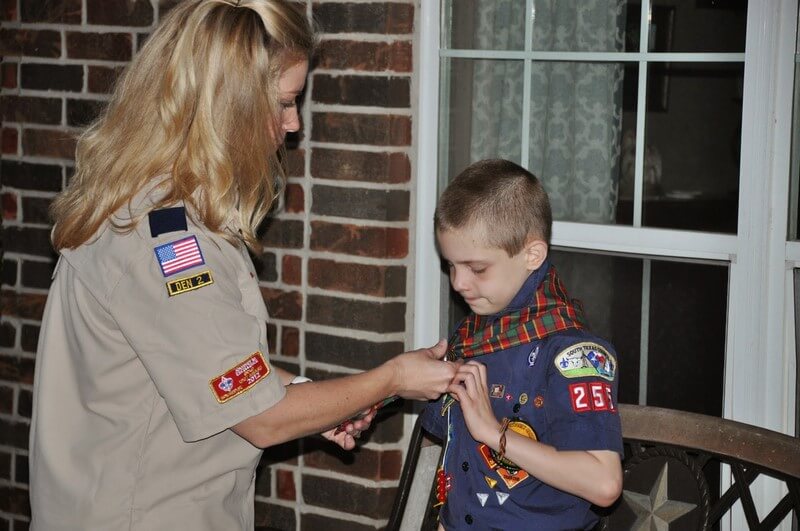 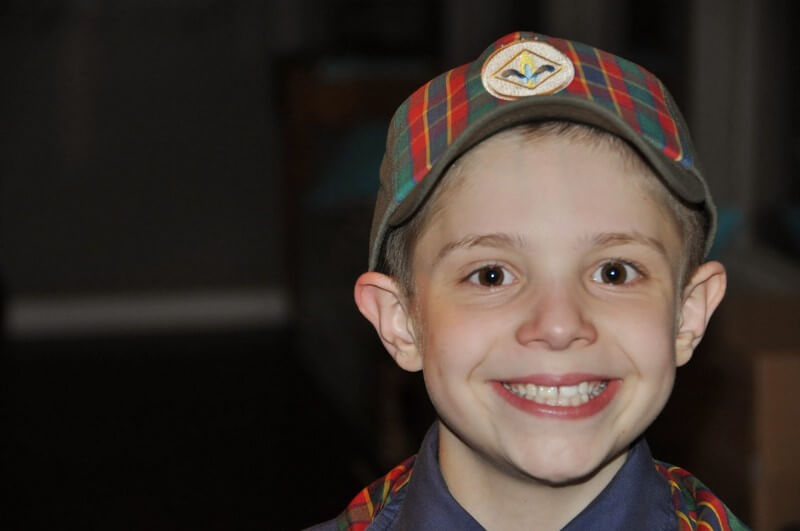 God is so good!