Re-Purposing an Old Family Pass Down

***Update 10/9/14 - Thank you  Liz Marie  for an awesome Link Party.  Please take the time to hop over to her  site  and view the other awesome ideas! My husband and I recently re purposed an old desk that has been passed down five generations on my side of the family.  It was like taking a stroll through my family history.  When my husband striped the paint, we found five different shades of paint!  With each shade, we called my mom and tried to figure out who painted which paint and why.  We also removed the seat cushion and found multiple layers of old fabric, it was so interesting! My husband treated the desk with love and care.  He was very careful as he striped away the paint, re-stained the old wood, added fresh paint and displayed the beautiful distress of almost 200 years.  We don't know the exact age of the desk, but we do know it came with my family when they left Scotland in 1827. Take a look.  :) 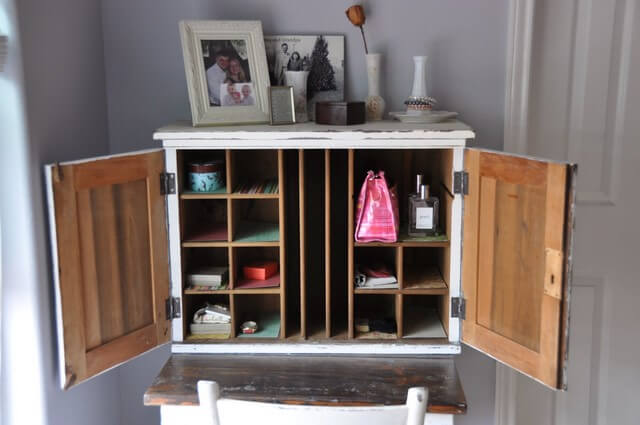 I did not want the inside of the desk painted.  Also, I lined each compartment with random pieces of scrapbook paper.  I did not glue the paper to the wood because it is so old. 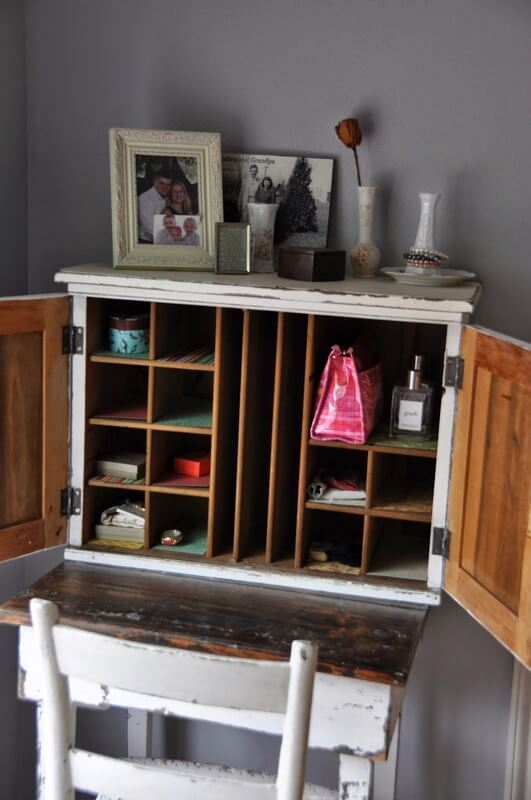 I do not know the original use of the desk.  Although, I envision it to be a desk that held stationary and home management type things.  I am using the desk for jewelry, make up, perfume, all things girly. :)  It is such a great space for organization. 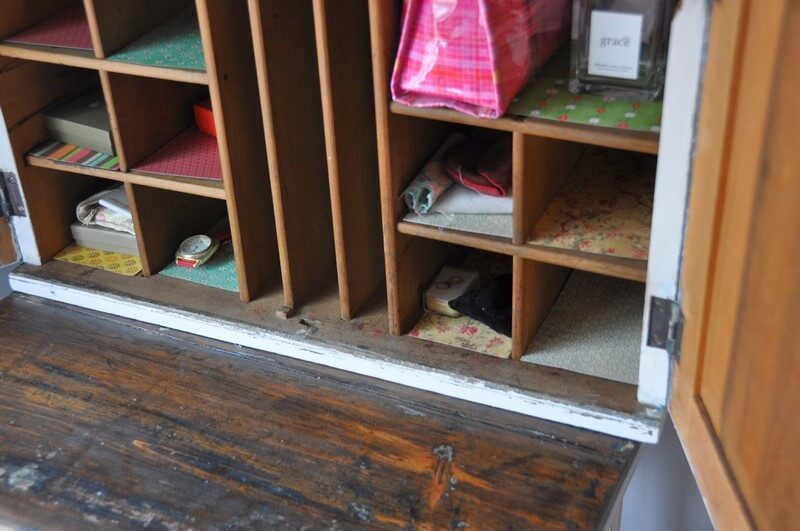 I love that my husband exposed the dark wood on the top of the writing area.  It has so many scratches and dents, so much family character. 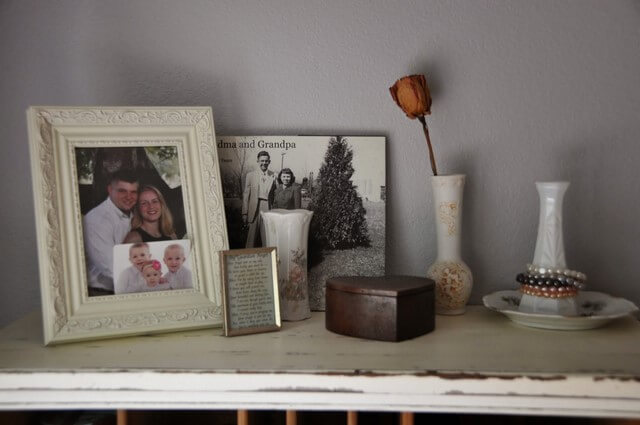 On the top of the desk, I am displaying several of my favorite things. 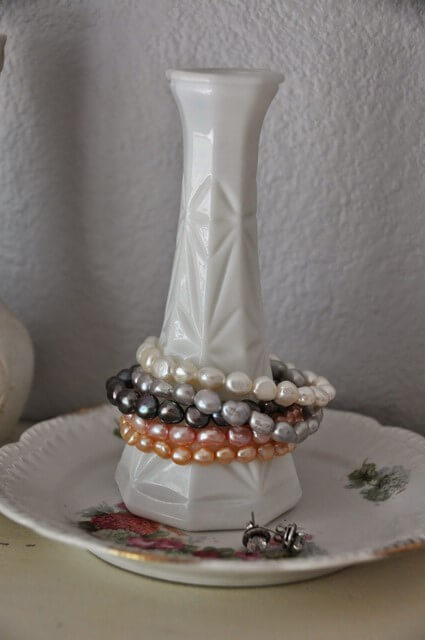 Both the vase and plate have been passed down.  I think they are beautiful. 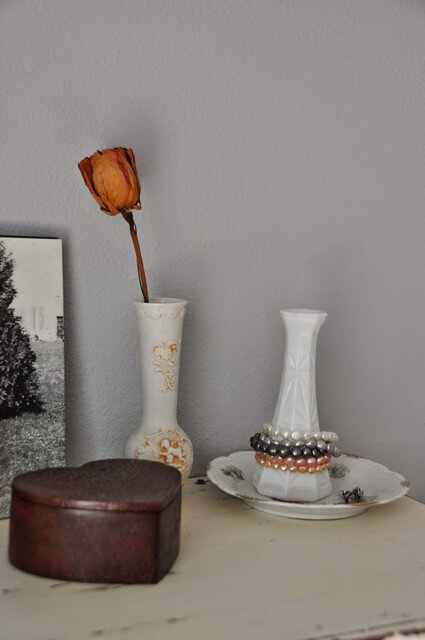 The wooden heart shaped jewelry box was made by my grandfather, Warren Johnson, in high school shop class, 1946. 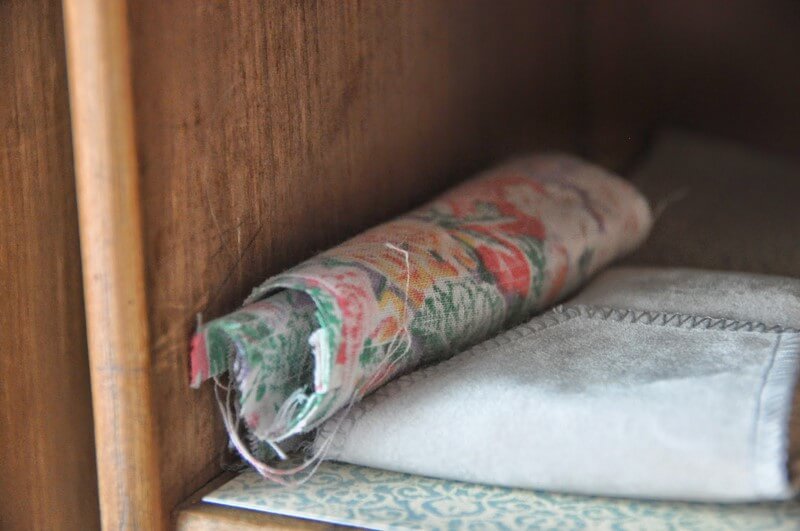 This compartment is so special to me.  I have a rolled up piece of fabric left over from one of my grandmother's skirts (Esther Johnson - read about here, here, or here).  I just love it.  A couple of years ago, my cousin had pictures of my grandparents framed and matted.  The matte was the fabric of the skirt, she gave us the leftover pieces.  So beautiful. :) 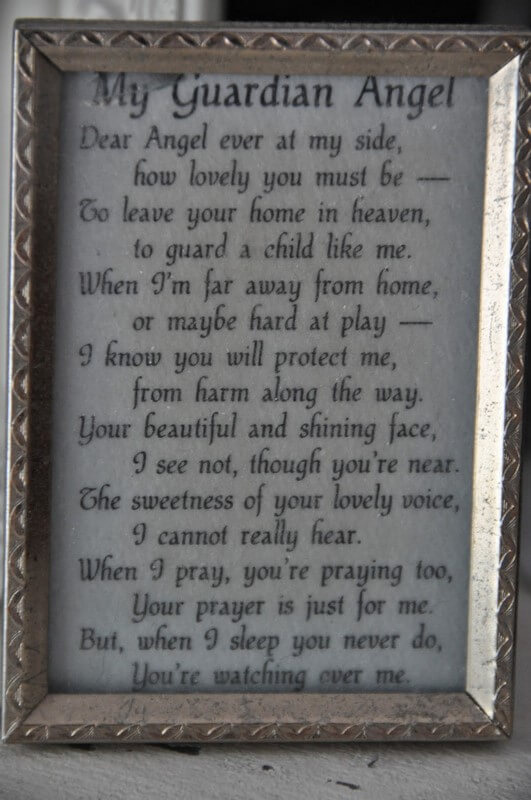 This is a poem that was left in my stocking when I was six years old.  My grandmother insisted my guardian angel (which she named Adora) left the poem.  :)  Now each of my children have the same poem in their rooms. 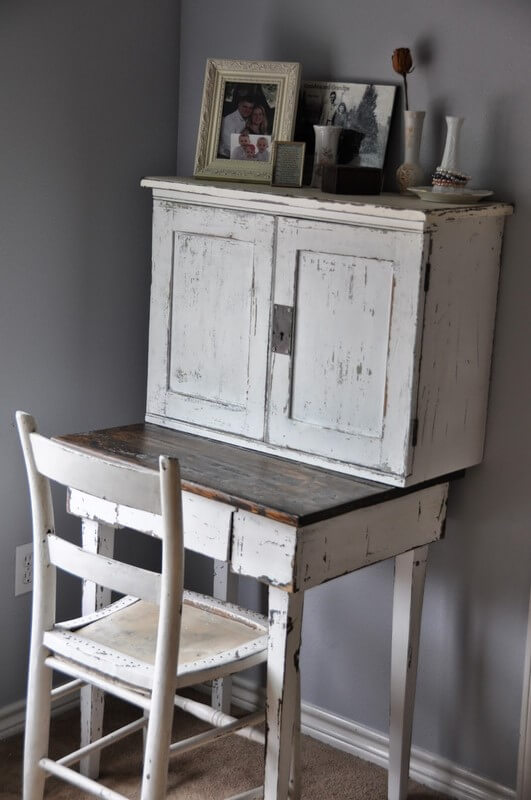 My next project is to recover the seat with just the right fabric.  :)

I have seen pieces like this in so many magazines.  I am so lucky to have something so interesting and with so much family love and history.  The refinish cost absolutely nothing since we already had the paint striper, stain, and new paint.  The scrapbook paper for the shelves were left over scraps from other projects.

If you are interested in more history of this desk please continue to read.

How the Desk and My Family Came to the United States
In 1827, my great, great, great grandparents (John and Margaret Baird) left Scotland for a new life.  John, who made flour for a living, told his wife about a man who was taking a large boat to America.  The man could only take 50 people.  John and Margaret packed a small trunk, a few pieces of furniture, dishes, blankets, and the family Bible.  They left the rest of their family and boarded the boat with their three daughters.

The boat left at the beginning of January 1827.  It was extremely cold and conditions were horrible.  The trip was only suppose to take 4-5 weeks, but due to the ice and fog the boat drifted near New Foundland for an extra six weeks.  After eleven weeks, the boat finally landed in Canada.  Everyone and their belongings got off the large boat and boarded smaller boats for a trip down a river.  The men rowed the boats with oars or pushed them with poles.  Night after night the boats would be pulled up to shore and the men would build a big camp fire.  The women would cook supper, and then the men would sleep in blankets on the shore while the women and children slept in the boats.

Eventually, they arrived at the spot on the river where they planned to live.  All of the men built one large, long house.  Each family had its own bedroom and living room.  All of the families shared the same kitchen and dining room.  They also built a store where they could buy supplies from traders who passed through the area.  As one could imagine, over time the space became to small and the families began to bicker and argue.

There was only one ox and three Indian ponies to help with the farming (no one had any real farming experience).  Also, the Indians were extremely unfriendly and dangerous.  John and Margaret, very kind and loving Christians, did not like the fighting.  When the next winter came, John and a few other men headed out.  They walked across the frozen river to get to Michigan in the United States.  They found jobs with American farmers and were able to go back and get their families.  The following year, John and Margaret were told that there was an Indian attack on many of the people who stayed in Canada, all of their belongings were burned.

*** The desk started in Scotland, was moved to Canada, then Michigan.  It stayed  in Michigan for many, years, then was moved to Illinois.  When my mother and father moved to Texas in 1988, the desk also made the move.  Now it is in my home and brings us much joy in our master bedroom.

*** The family Bible (mentioned above) is also still in the family.  It too is almost 200 years old and lives with my mother's brother and my most favorite people, Uncle Dave. :)